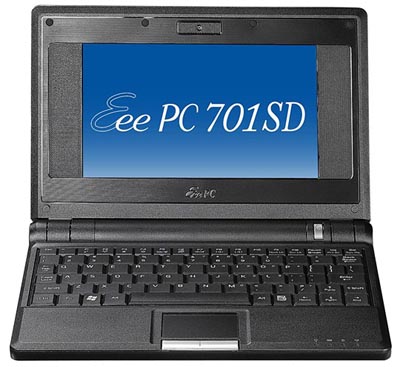 One of the common complaints that people had about the original Asus Eee PC was that the display was too small. Asus responded by creating 9-inch and 10-inch variants, but that’s not to say that Asus is giving up on the 7-inch arena though. In fact, there’s word on the street that Asus is concocting no fewer than three new versions of the Asus Eee PC 701, dubbed the 701SD.

There’s one version that is being marked as the Eee PC 701SD-4G, so we assume that it either has a 4GB solid state drive or it comes with integrated 4G (WiMAX?) connectivity. Another version is tagged as the Asus Eee PC 701SD (30G HDD), so that’s got to have a 30GB hard drive. The third model is marked simply as the Asus Eee PC 701SD, so we’re left wondering what that one has. We also need to determine the meaning of the SD suffix.

The new Asus Eee PC 701SD line will have a chassis similar to the 901 series, but with round edges, a new logo, slighly separated touchpad buttons, and a 7-inch screen. It’ll probably be powered by Atom too.