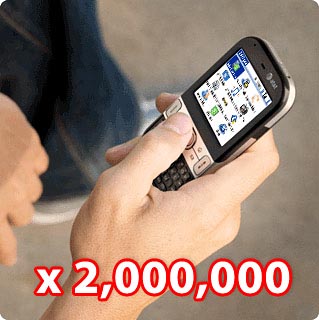 Even though very few people are still rocking around town with a Treo these days, Palm has apparently found itself a bargain-minded winner in the form of the Palm Centro. It may not be as powerful as some of the other smartphones on the market, but it’s also a lot more affordable and quite a bit more compact. That could explain why the little smartphone that could has just hit the 2 million mark in total sales.

It was only back in March of this year that Palm celebrated the sale of the one millionth Centro and now, four months later, they’ve sold another million. Yes, I know that the Centro is rocking an operating system that looks like it’s from last decade and that tiny QWERTY keyboard is not particularly friendly to fatter fingers, but when it’s priced as cheaply as it is, the Centro offers a lot more than a conventional mobile phone.

The Palm Centro is currently being sold in 25 countries around the world.