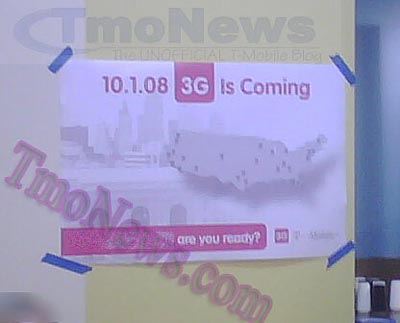 Yes, we know that AT&T has been doing the HSDPA thing for a little while now and we’re still waiting on that other GSM provider to jump into the fray. T-Mobile has been testing out the 3G waters in New York for several months and it seems that T-Mo is now ready to go nationwide with the service.

Well, not now. A very unofficial spyshot of an unofficial poster outside of a T-Mobile store has been spotted and it is pointing toward an October 1, 2008 launch of the T-Mobile 3G network. The poster asks if we are ready. I think it’s fair to say that most people have been ready for quite some time! The high-speed data network will pop up in 27 major markets across the country on that date (or so we believe).

It’s good to see T-Mobile finally joining the party, but if they want to see any sort of reasonable success with the new network, T-Mobile will want to have a fresh batch of 3G phones for us to consider at that time.