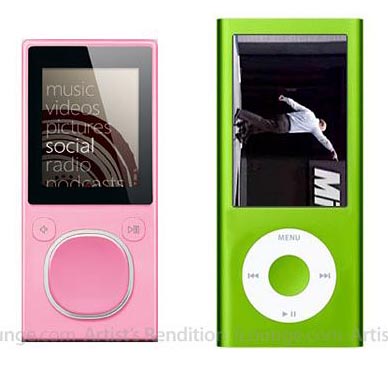 The response to the third-generation iPod nano has been a bit of a mixed bag, so it seems that Apple is going back to the longer shape found on the first two generations. We all know that Cupertino is hard at work developing a fourth-generation iPod nano, but now we have a little more (possible) information about what it’s going to look like.

Rumors on the street — and when I say street, I mean interwebz — point toward a fourth-gen nano that has a longer form factor, not unlike the first two generations. The difference is that the display will go for a 1.5:1 (3:2) aspect ratio, rather than the current 1.33:1 (4:3) aspect ratio. The former is what you’ll find on the iPhone and it is notably wider, making it more appropriate for video viewing.

Some people are saying that this move borrows a little from the Microsoft Flash Zune. Personally, I don’t mind the “chubby” third-gen nano. It fits better in my pocket.