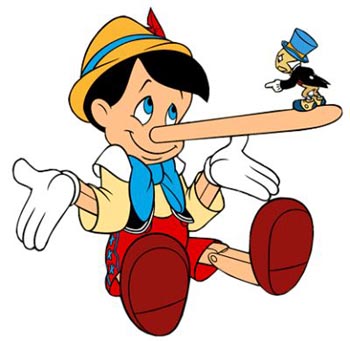 Computers can’t lie, can they? As it turns out, your mobile phone and your notebook could both be lying through their proverbial teeth. The next time your cell phone tells you something, you might want to take that statement with a serious grain of salt?

What the Heck Are You Talking About?

I came across this article, which basically explains why your notebook and your mobile phone, as well as just about any other portable electronic device, is constantly lying to you. The issue is related to signal strength and battery life. You see, while you may rely on these readings on a regular basis, it’s probably not a good idea to completely rely on the information being presented to you.

Why? According to Dan, the “signal strength bars on a mobile phone or laptop do, at least, say something about how strong the local signal is. But they don’t tell you the ratio between that signal and the inevitable, and often very considerable, noise that accompanies it.” This explains why you may still get dropped calls when you have four full bars of signal strength, but you can also have crystal clear calls with barely one bar of signal strength.

Let’s start with the signal strength end of the equation. This applies equally to cellular phones and to the Wi-Fi radios found inside of your computers. When you look at how many bars of reception you are getting, the indicator is only showing the relative signal strength. It is showing how well your device is able to see the base station (wireless router, cell tower, etc.). It is not showing how well the base station is able to see your device and thus, it is not showing how well the two devices are able to communicate with one another.

Having high signal strength doesn’t do you much good when you are surrounded by a high level of noise. It’s more about the signal-to-noise ratio. Only then can you really know how well the device is communicating with the base station (and vice versa). Going further, what does it really mean to have three bars of “strength” versus four bars? There is no set measure, so it’s up to the manufacturers to determine what constitutes one, two, three, or four bars.

Battery life gets even more murky. You might even say that it’s sleazy.

It’s not an issue that haunts notebook users quite so much, but I’m sure that you’ve had the experience on your cellular phone. By and large, the first bar of battery seems to last the longest. For this reason, you’ll see that your phone is showing a full charge for the vast majority of the day. As soon as that first bar drops out, however, the subsequent bars get burned through in a much more expedient manner. Why is this?

According to Dan, it comes down to two possibilities. First, the battery could look full for a long time to make the phone look good. Second, you are more likely to use your phone when it looks like it has full battery life. If you use your phone more — web surfing, text messaging, video recording — the service provider makes more money. When you see that the battery life is getting low, you’ll ease up on your use (and the service provider makes less money).

This second possibility is particularly evil, don’t you think? You can thank the sales and marketing department for this mild deception. Then again, can you really blame them? It fattens their respective pockets and it makes you feel better to see a full charge rather than a phone that is perpetually half-charged. You’ve probably noticed a similar phenomenon when it comes to the fuel tank on your car. It points at “F” for a long time before the needle begins to move.

In the end, it’s not your laptop or your cell phone that is lying. Computers can’t really lie. The deception is coming from the manufacturers instead. Even then, because there is no standard for defining how many bars constitute a certain signal strength or how many bars represent a certain level of battery life remaining, it is impossible to charge Nokia, Dell, and Toyota with lying to us.

There also has to be a reason why the first bar of battery is the biggest. That would explain why it lasts so much longer than the last (much smaller) bar, right? Right.