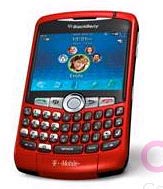 There’s so much to a BlackBerry than just the utilitarian work-related stuff. It may be your occupational lifeline, but because you whip it out so often, the ‘Berry is just as much a fashion accessory as anything else. If you’ve been digging the BlackBerry Curve but have been itching for a color scheme with more personality, you might want to mark August 4th on your calendar.

It’s on that date, so they say, that the BlackBerry Curve will be made available in Sunset Red through the kind folks at T-Mobile. The specs on the BlackBerry Curve Sunset should be much the same as its non-red counterparts. You get the same trackball, QWERTY, and all those other doo-dahs for mobile email and web surfing.

If the features hold up, then the pricing on the Sunset should be the same too. Alternatively, you wait a little longer and get your hands on a Bold. I’m just saying.