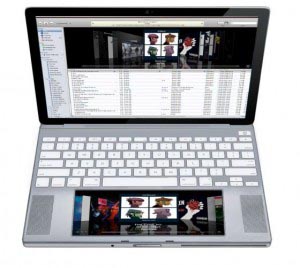 Part of the reason why the iPhone is so popular is because it has a fantastic glass touchscreen. In this way, it wouldn’t take much for Apple to plunk that technology into the next-generation MacBook. That’s the rumor swirling around on the Internet at the moment, but without any sort of substantial source, it’s really hard to confirm.

What they’re saying is that the trackpads on the upcoming redesigned MacBooks will be made of glass, feature multi-touch, and come with full support for gesture inputs. This kind of tech, aside from the glass thing, is already in play with devices like the MacBook Air. They also say that the exterior will be sculpted from a single sheet of aluminum.

Rounding out the rumor sheet are processor revisions based on Intel Centrino 2 and 16:9 aspect screens. This means that the Macs will be offered in 14″ and 15.6″ variants, rather than the 13.3″ and 15.4″ that you’ve got now. Look for a formal announcement in September. Maybe.