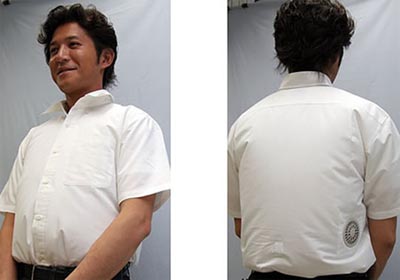 The summer months can get really hot and it’s especially unfortunate if you are forced to wear a stuffy uniform at work. Thankfully, someone has designed a shirt that will keep you nice and cool while the rest of your co-workers boil in their conventional shirts.

Not to be mistaken with the legendary puffy shirt from Seinfeld, this puffy shir comes equipped with a pair of 10cm fans. These cooling agents get their power from USB, four AA batteries, or a car’s 12V port. They’re not going to be particularly powerful, but having some fans blow right into your midsection would be quite soothing.

There are two things that might deter you from getting the USB Air Conditioned Shirt, however. First, the thing costs $169. Second, if you don’t have a beer belly, it’ll look like you have one with this shirt.