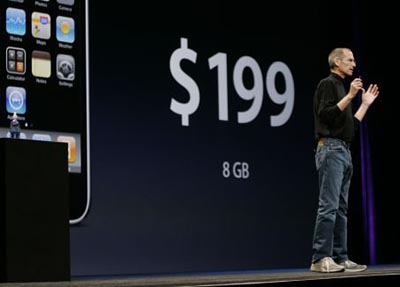 The iPhone 3G from Apple has been out for two weeks now and it’s still the talk of the town. Unless you’re willing to settle for the 8GB model, it’s still pretty tough to get your hands on one. It certainly helps on the Canadian side of things that Rogers is offering an option where you get 6GB of data for $30. That’s a substantial improvement over the initial iPhone plans that the GSM provider announced.

Very few cell phones have been able to dominate the market quite the same way as the iPhone 3G. Yes, BlackBerry devices are pretty popular with the corporate crowd, but the mass market isn’t quite as interested in such a business-minded device. Research in Motion is working hard to approach the consumer market with multimedia-centered handhelds like the Pearl, but the iPhone is still the dominating force in the marketplace. Steve Jobs has to be grinning from ear to ear.

Even though there are several suitable alternatives out there for you to consider, why is it that the iPhone still continues to dominate? Why is it that despite their best efforts, these other guys are having a hard time taking the touchscreen throne away from Apple? Let’s have a look.

It Starts with Multi-Touch

For better or for worse, just about every touchscreen-equipped consumer mobile phone released these days is getting compared to the iPhone and, more recently, to the iPhone 3G. The single greatest thing that all these phones have in common is that they have largely cast aside the need for physical keys in favor of having the bulk of the controls handled by the touchscreen. Some of these devices, like the LG Voyager and Samsung Instinct, come with haptic feedback. This way, you get a bit of a jiggle every time you tap the screen. This is supposed to mimic “real” tactile feedback.

Unfortunately, in my experience, none of these touchscreens have been able to boast the same level of responsiveness as the iPhone. That’s because most of these other touchscreens are using technology where you’re meant to interact with the display using a stylus. This requires near pin-point accuracy and it’s simply something that cannot be achieved with a chubby finger. The tech just isn’t even there, even if they’ve made a few adjustments to account for finger-based input.

The multi-touch display on the iPhone, by contrast, is highly responsive. It’s very accurate and can handle multiple inputs at the same time. It’s just better suited for the “I don’t need any physical buttons” form factor. For more on how the iPhone touchscreen is different, check out this great article on How Stuff Works.

User Interface is Most Important

Related to that, the mobile web browsing experience on the iPhone is substantially better than the experience that you get on most of these other touchscreen phones, even if they are smartphones with loads of additional productivity software. Part of this has to do with the multi-touch and your ability to “pinch” and “stretch” webpages in a very fluid fashion. The Samsung Instinct, by contrast, only gives you three pre-determined levels of zoom: 1X, 2X, and 1/2X. The higher resolution on the iPhone display goes a long way too.

HTC did a great thing by producing the TouchFLO skin for Windows Mobile, but it’s still not quite up to par with the utter simplicity and usability of the iPhone. I would have liked to see some sort of “Today” screen on the iPhone, but aside from that, the user interface is sleek and user-friendly. Simple swipes work all sorts of wonders on Apple’s creation.

And this is largely where Apple is winning. Whether it be Mac OS X on a Macbook or the click wheel on the iPod, Apple has done a wonderful job with creating an intuitive user experience. It’s not clunky. There are no complicated menus to interpret. It just works… and this is coming from a non-Apple fanboy.

Let’s face it. Apple makes some terribly attractive products. Although a Lenovo laptop may have more powerful innards than a MacBook, the latter easily wins in the style department. The same can be said about the cell phone market, though I totally dig the appearance of the HTC Touch Diamond. The iPhone is slick and it knows it.

The huge following of Apple enthusiasts certainly helps the Cupertino cause as well. Even though the App Store has only been open for two short weeks, it has already been flooded with all sorts of cool applications for the iPhone. Yes, there are people that do stuff for Symbian and Windows Mobile too, but where does that leave something like the LG Vu and Samsung Instinct? The aftermarket support is certainly stronger for the iPhone as well.

The popularity of the Apple iPhone 3G isn’t going to slow down any time soon. Maybe the BlackBerry Storm (formerly known as the Thunder) will bring some serious noise to the yard. We’ll see.