As compelling as the iPhone 3G may be, it’s quite possible that you don’t want to lock yourself down to a lengthy contract with one of the pre-selected providers. By and large, the Apple iPod touch is effectively the same device as the iPhone, except for the fact that it doesn’t have the “phone” part of the picture.

If you’re mostly interested in the multi-touch, Wi-Fi, and App Store, then the iPod touch just might be the ticket for you. You don’t have to deal with a monthly bill, but you may have to pay for software upgrades when those come along. And now you can get the iPod touch, without a contract, for the same price as the iPhone 3G.

Refurbished models of the iPod touch are available through Apple. The 8GB and 16GB models are going for $199 and $299, respectively. If you want to hit up the 32GB iTouch, that goes for $429. I have a feeling that this could be paving the way for a refresh or a new generation. 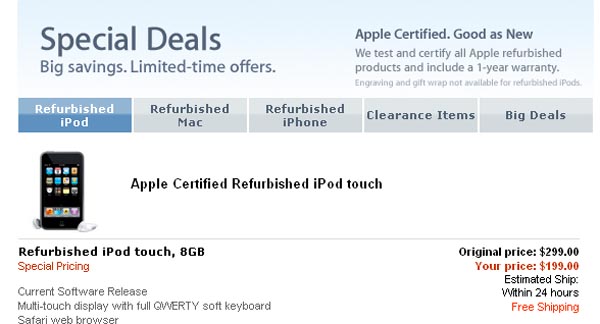