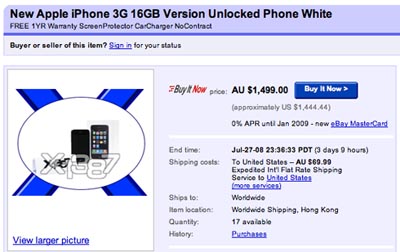 You knew that it was only going to be a matter of time before an unlocked iPhone 3G would find its way onto the world’s largest auction site. What may not have anticipated is the relatively astronomical price that the unlocked iPhone 3G would be able to fetch on eBay. There’s a premium to be paid for the opportunity to use the touchscreen wonder on whatever GSM provider you’d like.

Instead of just selling them one at a time, the first seller to offer an unlocked iPhone 3G is selling them at least 17 at a time. The buy it now price is probably a little more than what you’d be paying directly to Rogers or AT&T, because this guy wants you to fork over $1,499 Aussie dollars. The item will ship out of Hong Kong, a worldwide hub for unlocked phones (and shady wares).

If you happen to have an extra AU $1,499 kicking around and you don’t want to mess with a lengthy service agreement, then take a gander at the eBay auction. As with all eBay auctions, proceed with caution.