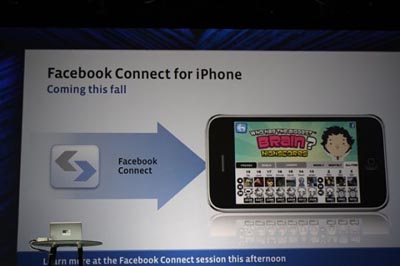 Developers are really starting to find some rather innovative uses for the Apple iPhone, especially now that the floodgates have been opened with the arrival of the App Store. At a Facebook developers meeting, it was announced that Facebook Connect would becoming to the iPhone in a few short months.

For those of you who don’t know, Facebook Connect lets application developers dive into the confines of Facebook from within their applications. The example provided by Crunchgear is a Twitter program “that, when you choose to get info from someone, takes you to their Facebook profile.” You could also have things that look for tagged photos on Facebook, common interests, and so on.

Considering how many people are on Facebook these days, being able to develop iPhone applications that tap into that huge user base (and all their juicy details) can be a huge boon for mobile connectivity.