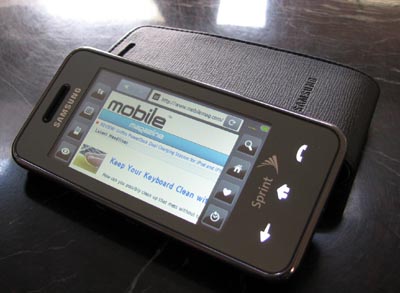 Ever since the Samsung Instinct won that CTIA Best in Show award earlier this year, people figured that it could be one of the best competitors for the hugely popular iPhone 3G. Now that I have been able to use the Samsung Instinct from Sprint for a while, I feel that I am now able to provide a real opinion on this touchscreen cell phone.

On paper, the Samsung Instinct is right on par with the iPhone 3G. Although it does not boast a speedy HSDPA connection for mobile web surfing, the Instinct does come with EV-DO. This is supposed to be just about as fast, granting you full access to just about every HTML website on the block. Around the back, you’ll also find a 2 megapixel camera for your picture-taking needs. There are very few physical keys, as the bulk of your interface with the Samsung Instinct will be through the haptic-equipped touchscreen display.

There are two major advantages that the Instinct has over its Cupertino counterpart. For starters, while it may not have loads of internal memory, there is a microSD expansion slot here. It doesn’t take much for you to bandy around town with a few 8GB microSDHC cards, offering much more capacity than the iPhone. It’s also notable that you can take the back cover off of this phone to swap out the battery. In fact, Samsung even provides you with a second battery free of charge.

For a better sense of the layout of the buttons and what you should expect to see included in the box, be sure to check out my Samsung Instinct unboxing and feature walkthrough video.

They may not necessarily want you to do it, but it’s inevitable that the Samsung Instinct will be compared to other full-face touchscreen phones like the iPhone, HTC Touch Diamond, and LG Vu. I found that the touchscreen was not as responsive as the one found on the iPhone, as it did not always register my taps. The situation was even worse when it came to the three touch-sensitive controls underneath the display. It really was hit and miss, because sometimes it would work every time. Other times, I’d have to tap the “home” icon several times before anything would happen. Using the Instinct can be a bit of a frustrating experience for this reason. 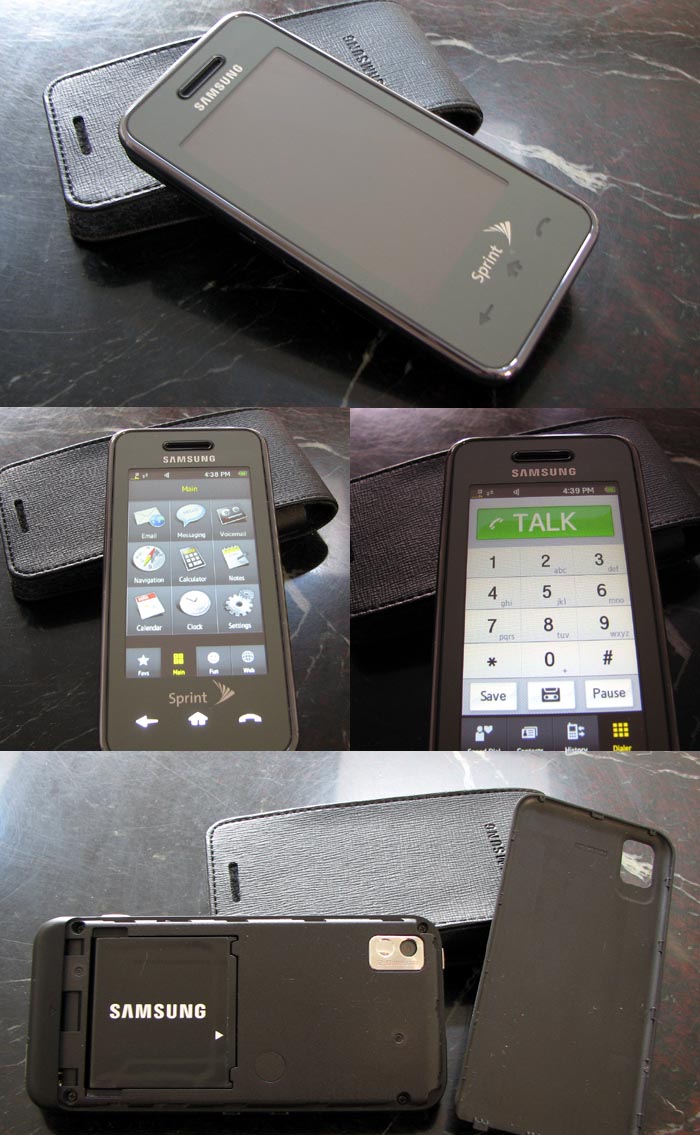 Although it is not equipped with multi-touch, the display does come with haptic feedback technology. This means that each time you tap on an icon or try to drag your way across the menu, the phone vibrates just a little. This is supposed to replace the tactile feedback that you would normally receive from a physical button.

The menu is arranged in two halves. If you tap on the home button, you are offered one set of four tabs. It is here that you can check your email, surf the web, play games, enjoy music, adjust your schedule, and so on. By and large, the icons are arranged on a grid. To access call-related features, you tap on the phone button. This brings up the address book, speed dial, and the dial pad. Call quality was very good.

The camera is just a 2 megapixel unit, but it is able to take reasonably clear pictures. Unlike the iPhone, it is also capable of recording short video clips. Unfortunately, there is no flash on board, so don’t expect to take any snapshots under low light conditions. It won’t replace your standalone digital camera, but it’s good enough for capturing a few spur-of-the-moment memories.

In terms of entertainment, the Samsung Instinct will also keep you going with a music and video player, as well as FM radio. Playback is about on par with other music phones. The standard 3.5mm headset jack is a definite plus.

And this is where you’ll get even more frustration. Mobile email is easy with Yahoo!, Hotmail, Gmail and other online services, but it is not push. You need to actively request a refresh. This isn’t a huge deal unless you need to be highly connected all the time.

The web surfing experience, however, is not up to snuff. There is no fluid zoom feature, and it’s hard being accurate enough to click on many of the specific links. Furthermore, embedded YouTube videos do not load. From what I can tell, the Instinct is not able to handle Flash whatsoever. Certain Java/Javascript applets don’t load either. This includes some of the embedded maps that you may find on certain websites.

It’s clear that Samsung is targeting the same segment of the market with the Instinct as the Apple iPhone 3G. Even though the device has been selling very well, I feel that it is still not up to snuff with the iPhone. The user interface is not as crisp. The touchscreen is not as responsive. And you are not able to load third-party applications at will.

The Samsung Instinct is a decent phone with a nice feature set, but if you’re thinking that it will be a suitable replacement for the iPhone… well, you’ve got another thing coming.