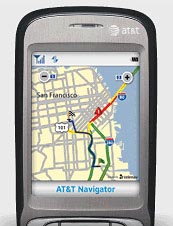 This could work out to be cheaper than buying a standalone portable GPS navigation device and then paying the extra money to load up on additional maps. AT&T Navigator has already been directing Americans in America for some time, but now the service has expanded to include a total of twenty countries around the world.

The new AT&T Navigator Global Edition provides spoken turn-by-turn directions in English, German, Italian or Spanish. The coverage area included in those 20 countries include most of western Europe, North America, and the US Caribbean. They’ve also tossed in coverage for six cities in China — Beijing, Shanghai, Qingdao, Shenyang, Tianjin, and Qinhuangdao — in anticipation of the Olympics next month.