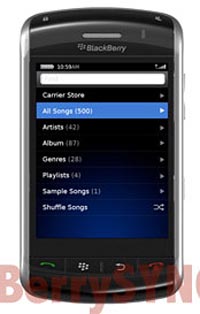 The BlackBerry Thunder touchscreen smartphone is now known to the world as the BlackBerry Storm, and it seems like it is going to have a few tricks up its sleeve when it launches with Verizon. There are still plenty of rumors circulating about Research in Motion’s first full-face touchscreen phone, but this latest one really puts it among the company of iPhone killers.

We had already heard in the past that Verizon Wireless would be working on its own version of visual voicemail and now the rumor is that the BlackBerry Storm will be one of the first devices to boast this feature. This way, instead of having to dial into a voicemail number and fumble through the menu system, you can play your recorded messages in any order directly from the haptic-equipped touchscreen.

Given the huge established user base that RIM enjoys with its BlackBerry devices, they could be in for quite the winner with the Thunder Storm.