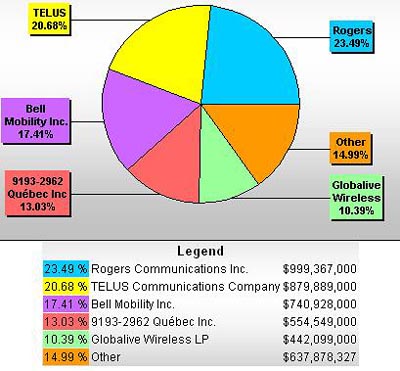 The idea behind the wireless spectrum auction that has been taking place in Canada these last eight weeks is to introduce some much needed competition into the Canadian cellular market. People complained about the GSM monopoly held by Rogers, so this auction was supposed to bring along another major player that could give the big three a run for their money.

After 331 rounds of bidding, the dust has finally settled on the Canadian wireless spectrum auction and it turns out that the top three spots are occupied by some very familiar faces. Sitting at the top is Rogers Communications, which bid nearly $1 billion to acquire 59 licenses. Second and third place went to Telus ($879 million, 59 licenses) and Bell ($740 million, 54 licenses), respectively.

Does this mean that the auction was a failure? Not exactly. The fourth and fifth spots went to Quebecor and Globalive Wireless, both of whom would be new to the national wireless market. Now we just have to wait and see what they do with their newfound licenses.