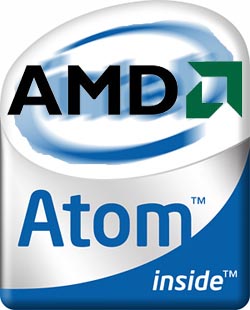 When I was in Taipei for Computex last month, a big part of the show was dedicated to the emergence of the small form factor notebook PC. Everyone already knew about the Asus Eee PC and how it sold like hotcakes during the holiday season. With Computex 2008, just about every major Taiwanese laptop maker got in on the small laptop action. Plenty of non-Taiwanese manufacturers entered the fray as well. It’s clear that while the market may not be profitable, these guys still want a piece of the pie.

But the prevailing theme was just about small notebook PCs. It seemed to be much more specific than that, because nearly all of the subnotebooks on display were rocking the new Intel Atom processor. We saw the new Asus Eee PC 901, for example, as well as similar notebooks from MSI, Acer, Gigabyte, and more. With so much love for Intel’s Atom, where is AMD going to find itself?

On Friday, I picked on the story of the upcoming AMD Bobcat. That’s just the codename for now, but the gist of the story is that this new microprocessor from AMD would compete directly against the Intel Atom. The existence and development of this small chip was confirmed by Dirk Meyer, the top dog at AMD.

Virtually no details surrounding the exact configuration and specs of the AMD Bobcat processor have been announced. You can’t even find any reasonably substantiated rumors out there. At this point, it’s little more than hearsay, so we’re left guessing what AMD will have in store for the Atom-loving crowd. What we do hear is that they are shooting for a launch some time in November. This could be enough time for laptop makers to implement the new chip into small notebooks for the Christmas shopping season. It’s a tight squeeze, but it might be doable.

These netbooks were never meant to fully replace your main computer. Instead, they’re supposed to serve as supplementary devices that you can carry around with you everywhere you go, granting you a near desktop-like experience wherever life’s roads may take you. In this way, it’s unlikely that you will be using an MSI Wind or an Acer Aspire One as your primary machine. It’s just there for web surfing, document editing, and maybe a little spreadsheet updating too. They’re not that much more powerful than a good smartphone; they just happen to have a more usable keyboard and a bigger display.

With the arrival of Intel Atom, we were led to believe that these little laptops would afford the same level of performance as the first-generation Centrinos. Battery life was supposed to be a lot better than a real Intel Core 2 Duo processor too, because it wouldn’t be drawing nearly as much power. Properly configured, you may be able to get upwards of 6 hours of web surfing time before the battery crapped out.

Carving Out a New Niche?

If AMD takes the route of performance, there is definitely a market there. In addition to high-end units like the Flybook line, there are other manufacturers who are implementing Atom into some non-budget computers as well. The Fujitsu U2010 is doing Atom and it costs $1,300. That’s a far cry from the $400-$500 price point of most netbooks. The same can be said about a potential Atom-powered Pepper Pad with Vista.

The trouble with both of those is that Atom, as it stands, probably isn’t powerful enough to pull off that kind of muscle. AMD could jump in and make a low-cost, low-power, but relatively high-performance processor. Bobcat could really pounce on this huge opportunity. (Sorry, that was a horrible pun.)

Still Trying to Catch Up

If AMD is shooting for a November launch of Bobcat, it could be too little, too late. This is just a rumor for now, but dual core Atom chips could be ready as soon as September. This would give Intel a two-month head start on AMD, not to mention the head start that Intel already had with the first generation Atom.

As a result, the public reaction to an AMD Atom-like processor wouldn’t be so much a perception of innovation as much as it is a perception of emulation. Just look at all the subnotebooks that look a little too much like the Eee PC and all the touchscreen phones that seem to mirror the iPhone. AMD could already have its work cut out for it before they even get started.