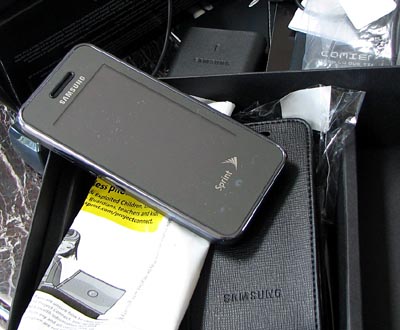 Samsung knows a thing or two about making some rather attractive products, more often than not featuring a piano black finish. While everyone else seems to be clamoring over a certain phone from Cupertino, the Sammy crew says that they have quite the fantastic touchscreen mobile phone of their own.

I just got my hands on the new Samsung Instinct, available through Sprint in the United States, so I thought it would only be apt that I provide you guys with a proper unboxing and feature walkthrough. As you know, this is the Sprint version of the phone, but I think that the versions of the Samsung Instinct sold by Telus and Bell in Canada are much the same.

In terms of first impressions, I like the overall look of the Samsung Instinct. They’ve kept the phone remarkably thin and it’s not that much bigger than a regular phone. Despite its reasonable proportions, the Instinct is heavier than I thought it would be. It’s about the same weight as my HTC Wizard, which I already thought was pretty heavy.

The user interface isn’t quite as slick as the one found on the iPhone 3G, but it’s still more user-friendly than the interface offered on the LG Voyager from Verizon. Basically, you are offered two sets of four tabs. The first is accessed by tapping the home “button” under the display. This grants you access to your main applications. The second set of four tabs is accessed by hitting the “phone” button, and these are your phone-centric tools like a phonebook.

In any case, you can expect a full review of this touchscreen phone in the days and weeks to come. I intend on doing a more thorough video featuring the user interface, on-screen QWERTY keyboard, and some of the other critical features found on the Instinct. Stay tuned!