The goal of any company is to turn a profit and Apple knows how to do this quite well. When you compare the cost of an Apple device to the retail price.. there is quite a difference. Apple’s original 8GB iPhone cost the company around $227 per unit to build, according to iSuppli – a market intelligence company. iSuppli has recently stripped apart the new 8GB iPhone 3G and found that it costs $174.33 to build.

In the last year or so, Apple has managed to reduce the cost of manufacturing an 8GB iPhone by over $50 while adding extra features such as a 3G and assisted-GPS. Now let me remind you, the cost of an 8GB iPhone 3G is $199, subsidized! No one has found out how much an un-subsidized iPhone costs, but we can expect it to be in the $400-500 range, similar to the first generation iPhone.

The overall design hasn’t changed a whole lot, and the cost-cutting in the phone is described as “evolutionary” rather than “revolutionary.” Another noticeable change is a single circuit board design, versus the two-board design in the previous generation, Apple has also chosen to make the battery easier to replace by not requiring you to solder in a new one.

The iPhone 3G may be pricey but there has been no lack of attention around the device as it is still quite hard to find. I know first hand as I’m still trying to hunt down a 16GB model. The joys of being a Canadian and an Apple fan. 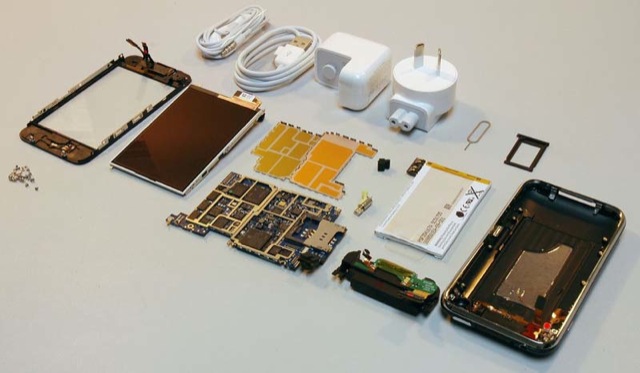