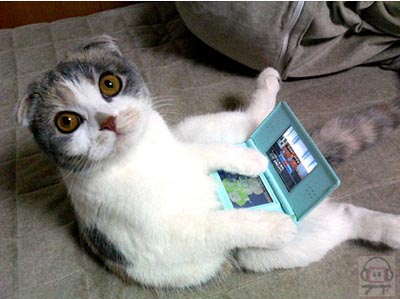 The Nintendo E3 press conference was held earlier today. While Shigeru Miyamoto and crew unveiled some rather nifty creations, like updates to the Wii Sports and Animal Crossing franchises, there really wasn’t all that much out there in terms of a redesign for the Nintendo DS Lite. Seeing how the updated (let’s not forget about the DS classic or DS “phat”) dual-screen gaming machine has been out for a while, it only makes sense for Nintendo to give us a new version.

I don’t know about you, but getting treated to new color schemes and Pikachu-themed special editions just doesn’t cut the mustard for me. Seeing how Nintendo didn’t really provide us with any sort of direction for the next Nintendo DS, it’s a little hard to say where they are going to take the platform. That said, there are probably only two routes to take.

Compared to the Sony PSP, the Nintendo DS Lite is quite the lightweight. It’s smaller, lighter, and less powerful. Although Nintendo went smaller when it transitioned from the DS Phat to the DS Lite, I don’t see why Nintendo couldn’t go bigger again with the next Nintendo DS.

I’m not saying that the actual device will necessarily be much bigger, but it’s very possible that the next DS would come with a huge smattering of upgrades and new features.

For example, the resolution on both displays could be significantly improved, as can the graphical prowess of the gaming handheld. By doing so, Nintendo would be able to better compete against the PSP on the eye candy front. Can you imagine ultra high-resolution versions of Nintendo’s franchises? DS games haven’t exactly pushed the graphical envelope yet.

Following in the same line of thought, it wouldn’t take much for the DS2 to get bigger displays as well. Some of the concept art that has been floating around the Internet shows a substantially larger touchscreen and this could make for more accurate controls. Going further, wouldn’t it be awesome to have a multi-touch display?

Other big features that could be included in the next Nintendo DS could be Bluetooth connectivity, the ability to use the DS as a Wii controller, integrated TV tuner, and an accelerometer.

When thinking about the future of the Nintendo DS, perhaps we should look at its immediate predecessor. The Game Boy Advance was a huge leap forward for Nintendo, but people didn’t really like the Game Gear-like form factor. Nintendo introduced the clamshell when the Game Boy Advance SP came along. The screen was brighter and, when closed, the GBASP was quite a bit more pocketable than the GBA. After that, the Game Boy Micro came along, making the device even smaller.

Given this history, I think that it’s more likely for Nintendo to introduce a smaller and sleeker Nintendo DS Lite (the Liter? Litest?). There were already some rumors heading into today’s press conference that Nintendo would unveil a version of the DS that lacked the GBA slot altogether. People don’t really need that backwards compatibility anymore, aside from using the second slot for accessories (like the Guitar Hero: On Tour controller).

By taking away the GBA slot, the DS can get a fair bit smaller. The spacing between the buttons and the display can be reduced as well. I don’t really foresee much of a reduction in screen size, but the design can be a little more efficient, especially in terms of thickness. Naturally, the thinner DS would come in a variety of colors as well.

The Best of Both Worlds

Nintendo will definitely have a new version of the Nintendo DS at some point. It’s just a matter of time. Realistically, I don’t think Nintendo is going to do much with the refreshed system, just as they did when going from the DS Phat to the DS Lite. The introduction of brightness control, for example, was great in that transition, as was the reduction in size.

For the DS Lite 2, I think that it’ll be roughly the same size, but with a bigger display, thinner profile, and a few more features like the ones mentioned above. Will they ditch GBA support? Maybe. Then again, maybe they’ll continue to sell two or three different versions side-by-side, just as they did with the Game Boy Micro and GBA-SP. Different versions to suit different needs.