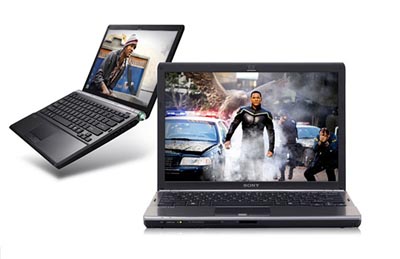 Now that Intel’s new Montevina platform is alive and kicking with Centrino 2, Sony is cashing in with no fewer than four new lines of notebooks that make use of this powerful platform: FW, SR, Z, and BZ.

The FW Series is catering specifically to the multimedia-minded crowd. It’s got a rather unconventional 16.4-inch widescreen display and the reason why it has this unconventional screen size is because it has a true 16:9 aspect ratio. If the 16.4-inches isn’t enough for you, it is possible to output video through the integrated HDMI port. Premium notebooks with Blu-ray start at $1750, whereas base models start at $1000.

Pictured here is the SR Series. Constructed of magnesium alloy and available in five colors, the 13.3-inch widescreen laptops get webcams, 802.11n networking, and decidedly svelte styling. Prices start at $1400.

The Z Series, like the FW Series, comes with a rather strange-sized screen. The 13.1-inch notebook is doing the 16:9 thing too and it’s got Blu-ray, hybrid graphics, and fingerprint reader. SSD-equipped units start at $1800.

Last but not least, the business-minded BZ Series has 15.4-inch displays and a sub-six pound frame. Prices start at $1000.