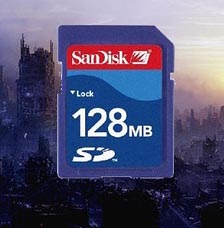 Remember when blank CD-Rs first hit the market? It was pretty cool being able to “burn” your own CD, but soon people started itching for discs that could be used again and again. Shortly thereafter, we were introduced to the CD-RW. A similar progression happened with DVD media. Strangely, the progression is going a little backwards with flash memory.

While all other SD cards have no problem being used again and again, the new SanDisk WORM SD cards will not come with this functionality. Instead, you can only write on the memory card once. The WORM — Write Once Read Many — cards are meant to store information that has to be kept unchanged, and the cards are supposed to last 100 years.

Naturally, the SanDisk WORM SD cards won’t be very useful to the average consumer, but they could prove to be a reliable storage medium for court records, police departments, medical applications, and so on. The WORM cards currently top out at 128MB, but I can’t see why similar tech can’t be implemented in larger capacity cards. No word on pricing.