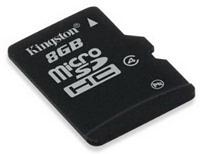 Even though SanDisk has been offering that capacity in that format for some time now, it’s good to hear that Kingston is finally following suit with an 8GB microSDHC card of its own.

There isn’t much that is terribly revolutionary with this new fingernail-sized memory card, but it’s still pretty impressive that they can stash eight gigs into such a tiny package. The Class 4 card, by definition, is capable of pushing data around at 4MB per second. With eight gigs, you have enough space for “more than 1,500 digital songs, more than 4,000 images from a 5MP camera phone, or up to eight hours of video.”

The Kingston 8GB microSDHC will retail for $58.00 and is backed by a lifetime warranty.