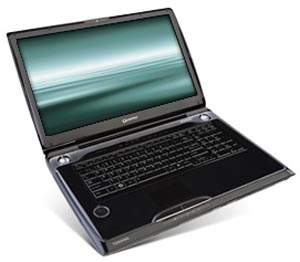 Up until now, the only place where you would find that crazy Cell processor was inside the Sony PlayStation 3. Such is no longer the case, because the Cell is now finding its way over to the world of laptop computers.

The first notebook to feature the Cell Processor is the Toshiba Qosmio G55. Toshiba is saying that the G55 is the “world’s first laptop with cell processor tech inside.” The cell processor is used for upconversion, transcoding of video formats, and face-based video indexing. The Toshiba Qosmio G55 even comes with some innovative gesture controls to further separate it from the rest of the pack.

Other features include Windows Vista, Core 2 Duo processor, 4GB of RAM, and NVIDIA GeForce graphics. Prices will start at $1,299.99 and then you can top up some upgrades for more money.