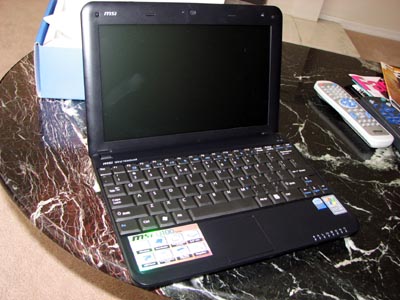 When the MSI Wind was first announced back in April, they promised that this small Atom-powered notebook would be able to provide you with up to seven hours of battery life. That’s better than most regular laptops on the market and with a real 80GB hard drive, the Wind would be able to provide a decent amount of storage as well. For all intents and purposes, it seemed like the Asus Eee PC would have a fairly substantial competitor on its hands.

After showing of the MSI Wind at COMPUTEX Taipei, MSI told the world that the little laptop would hit the market on June 27th. To make matters worse, the delay would also be accompanied by a smaller battery. Instead of the six-cell battery that was originally supposed to come with the Wind, a three-cell battery was put in its place. Battery life, as you can imagine, was cut in about half.

And then it got delayed again. To my knowledge, MSI never did provide us with a full answer as to why they pushed the launch date back another ten days or so. After that, they pushed it even further. In any case, the MSI Wind is (finally) shipping now. Has it been worth the wait?

The big buzz surrounding the latest generation of mini laptops has been the introduction of the Intel Atom processor. This little number-cruncher is supposed to be smaller and more efficient than any of its predecessors, perfectly finding a home in the middle of several subnotebooks. They say that the Atom will also be good for mobile Internet devices (MIDs) and even smartphones. And yes, the MSI Wind has one of these suckers.

Aside from the Intel Atom 1.6GHz processor, the MSI Wind also comes with an 80GB 2.5-inch SATA hard drive, 1GB DDR2 667MHz RAM (upgradeable to 2GB), built-in gigabit Ethernet LAN, built-in 802.11b/g WLAN, Bluetooth, and Windows XP Home Edition. You’ll also notice that above the 10-inch (1024×600) display there is a small webcam, as well as a microphone. This makes it perfect for video conferencing, lifecasting, and other online duties.

Rounding out the features, you get three USB 2.0 ports, a headphone jack, a microphone jack, a VGA video output, and an integrated 4-in-1 multicard reader. In an effort to save space, weight, and battery life, MSI opted to eschew an optical drive altogether. If you need to read a CD or DVD, you must do so through an external drive.

Initial Impressions of the Retail Version

After taking the MSI Wind out of the box, I was pretty impressed with its relatively small stature. The box itself was already pretty small, but the notebook itself only takes up a small portion of that size.

The MSI Wind is definitely larger than the Asus Eee PC 701 or 901, and it’s up to debate as to whether that is a good thing or a bad thing. The keyboard is about 80% the size of a “real” keyboard, so it’s very usable, much more so than the cramped keyboard of the original Eee. You may recall that some people started relying on a “three finger” typing style with the Eee. That’s not necessary with the Wind.

Accompanying the larger keyboard is also a larger display. The resolution on the 10-inch widescreen is 1024 x 600, giving you enough room to render most websites in a reasonable fashion. The 600 pixel height is definitely on the short side of things, but 1024 pixels across hits the sweet spot. It’s no graphical powerhouse, nor will you be able to run anything too heavy. In my brief time with the netbook thus far, I found that it even lagged on certain websites when I tried to scroll ahead. Don’t try to push this lappy too far.

Should You Buy the MSI Wind?

The 10-inch MSI Wind is definitely smaller than a conventional 14- or 15-inch laptop, but it’s nowhere near as small as the original 7-inch Eee PC. It’s not that far off in size from some of the popular 11.1- and 12.1-inch widescreen notebooks. Performance isn’t quite there, but it’s good enough for some basic web surfing — including YouTube — and other simple tasks.

At $479, the MSI Wind is very affordable and can serve as an excellent supplementary system. If you wait around a little longer, the Linux version will be out soon and it will be even cheaper.