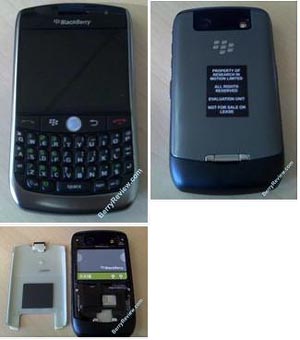 You may find it a little surprising that Research in Motion would even bother putting out a brand new handset that is completely devoid of 3G connectivity, but that appears to be the case with the upcoming BlackBerry Javelin. I guess not everyone needs high-speed wireless Internet access, especially if all they are doing is pushing around main text-based email messages.

Rumored specs on this business-minded handheld include 2.5G connectivity, integrated Wi-Fi, GPS navigation of some sort, 3.2 megapixel camera, trackball navigation, and a full QWERTY keyboard. Because the screen is not on, it’s hard to tell what sort of operating system or user interface the BlackBerry Javelin will be running, so it could be doing a similar dance as the Bold. We can’t say for sure.

The kicker is that the BlackBerry Javelin isn’t slated for mass consumption until the middle of next year. By that time, we would already be drooling over the next iPhone, wouldn’t we?