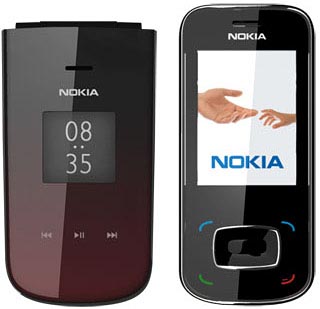 Nokia has a couple of new offerings for the CDMA crowd and while neither will garner the same attention as a certain handset from Cupertino, they are still worth noting. After all, the CDMA guys in the crowd can’t get their hands on that multi-touch wonder anyhow.

First up, we have the Nokia 3608 on the left. This clamshell has dual displays with the main display measuring 2-inches across the diagonal. On the outside of the phone, you’ll find a smaller display, touch-sensitive music controls, and a cool red flaring paintjob. Other features include a 1.3 megapixel camera, GPS receiver, FM radio, and microSD expansion.

The other phone is the Nokia 8208. It’s a dual slider with 3G, 3 megapixel cam, GPS, FM radio, and dedicated music controls that pop out of the top.