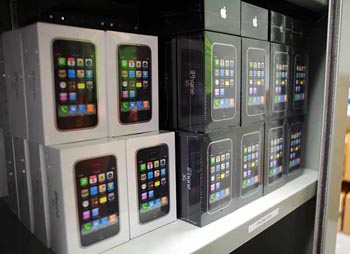 Up until now, the only boxes that we’ve seen of the Apple iPhone 3G have been black and these have been filled with iPhones that have the black plastic back. How does that translate to the white-backed versions of Apple’s second cell phone?

A video has been leaked out by AT&T personnel revealing that the white-backed iPhone 3G will ship in a white retail box. This will surely make it a lot easier for retail employees to differentiate between the two colors. It sure beats the conventional retail box thing where it’s just a little sticker or tickmark on the side of an otherwise identical box.

So yeah, that makes sense. White iPhone 3G in a white box. Black iPhone 3G in a black box. Will Steve Jobs go nano-nuts and start offering green, blue, and pink versions too?