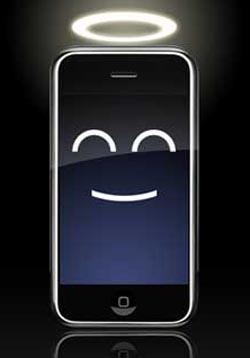 You might be reading this as you queue up in front of your favorite Rogers or Fido store. You may be only a few hours away from the opportunity to get your hands on an awesome Apple iPhone 3G. That $30 for 6GB data plan sounds awfully attractive and the crowd is really starting to gather. Thing is, have you considered the possibility that the Rogers kiosk will be sold out of the iPhone 3G by the time you get to talk to a service rep tomorrow?

What can you do? What possible solution can an Apple-loving Canadian consider?

It could be that you were waiting outside the wrong store. Maybe you thought that you were going to be all clever and line up outside one of the smaller Rogers stores, assuming that the lineup would be shorter and you’d be able to snatch up an iPhone sooner. Unfortunately, smaller stores get no more than 10 units. Too bad you were lucky number 11.

Perhaps one of the best strategies that you can deploy is to locate an area where there are multiple Fido and Rogers stores within close proximity of one another. This way, if the shop that you chose runs out of stock, you can sprint over to another location and try your luck there. Even better, if you have a few friends that are going to camp out, split up and camp in front of different stores. Other people in line may not appreciate it, but as one of your friends gets really close, you can choose to ditch your spot and cut in with him.

Not that we condone line-cutting or anything.

2. Look for an Unlocked First-Gen iPhone

So, you’ve tried all the Rogers and Fido stores in your area and they are all sold out of the iPhone 3G. It’s understandable. After they underwent that debacle of a fiasco, Rogers was forced to clean up its act and offer a more reasonable data plan. It also helps that you can mate the iPhone 3G with whatever voice plan that you’d like.

It may not be quite the same as having the new hotness, but you really aren’t losing out on all that much in terms of functionality. Assuming that the iPhone 2.0 firmware plays nice with the original iPhone, you will still have access to things like the App Store and Wi-Fi hotspots. You can still take 2 megapixel pictures and surf the web using Safari. No 3G or GPS, unfortunately.

With the iPhone 3G populating the marketplace, many existing owners will be looking to dump off their used first-gen iPhones. You might even score a deal on one… at least until you find an available iPhone 3G.

3. Buy Another Rogers or Fido Phone

You probably don’t want to hear this, but there are other handsets out there aside from the Apple iPhone 3G. If you don’t to jump over to CDMA land to get an HTC Touch Diamond or Samsung Instinct, Rogers and Fido may have a few options for you.

Fido may not exactly satisfy. The new Sony Ericsson Z750i costs $200 with a three-year contract, but it’s just a regular phone. There’s no touchscreen, third-party applications, or anything like that. You could consider the Samsung JACK or the Motorola Q9h if you want to take the route of Windows Mobile though. Both of those are priced well south of $200.

On the Rogers side of things, you’ve got the photo-happy Sony Ericsson K850i. This thing can surf the web (for $7 a month) and take five megapixel pictures. For more functionality, you can turn to the HTC TyTN or the BlackBerry Curve, both of which come with full QWERTY keyboards and all sorts of productivity software. The Curve even has GPS.

4. Wait for the Next iPhone

If you’re a true Apple enthusiast, you will not be pleased with anything short of the hottest and the newest offering from Steve Jobs and Cupertino. You may have been waiting for ages for the iPhone to officially make its way into Canada and you feel a little snubbed by not being able to land the iPhone 3G.

But that’s okay. Knowing Apple, there will be a new iPhone out soon enough and it will have more features and goodies than ever. Too bad waiting hurts so much.