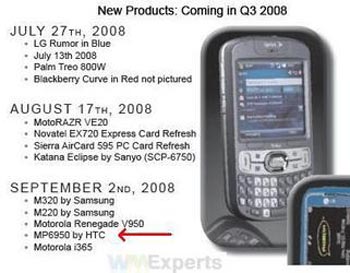 The roadmap for Sprint recently got leaked, giving us a glimpse into what the CDMA provider would have to offer us in Q3 2008. Buried in there is a mention of the HTC MP6950. Is this the Touch Diamond?

Nothing has been officially confirmed by Sprint just yet, but we do know for sure that this is an HTC smartphone. We just don’t know, for sure, which one it is. The model number for the current HTC Touch is the MP6900, so it is very possible that Sprint is simply launching the HTC Touch Dual.