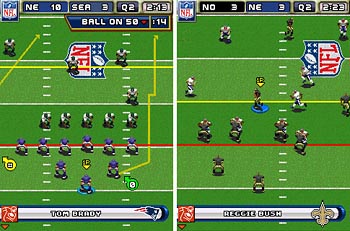 Electronic Arts may have the exclusive NFL license when it comes to home video game consoles, but I guess EA never locked up the mobile market. Gameloft has announced that it will be introducing NFL 2009 for your cell phone, complete with a comprehensive NFL license.

You won’t get generic teams, players, and stadiums either, because the license acquired by Gameloft allows them to use real player names, real teams, and even real stadiums. Not that you’d be able to tell from the details of the pixelated field, but it’s good to know that you’ll be able to control everyone from Eli Manning to (maybe) Brett Favre.

Available through most American cell phone carriers, Gameloft’s NFL 2009 can be acquired by texting “QV” to 82174.