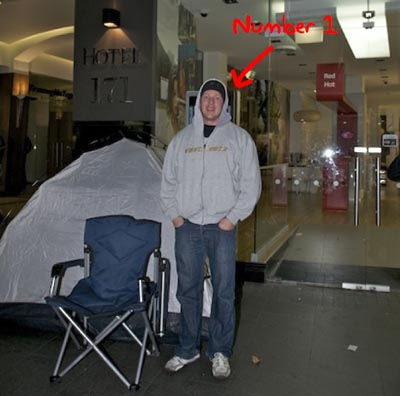 There may be a few extra units floating around at Apple headquarters, but no one has officially purchased a new iPhone 3G just yet. The launch date is this Friday and the lineups are already starting in New York City. That’s not the only city with lineups and the guy at the front of that queue will not be the first one to get an iPhone 3G.

Heading way over to the other end of the Earth, we find a guy named Jonny Gladwell. The New Zealander, as far as we can tell, will be the first person in the world to buy an iPhone 3G. He’s grinning from ear to ear, camping outside the Vodafone store in Auckland, New Zealand. As a result of the time differences and such, he is the first in line in the world.

Let’s make him Internet famous! He may be smiling now, but he won’t be so pleased when he starts paying for those crazy iPhone plans.