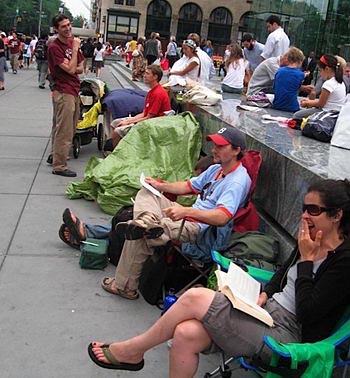 Setting the bar a few notches higher for Apple fanboys around the world, a small group of enthusiasts have already set up camp outside Apple’s flagship store in New York in anticipation of the iPhone 3G. As you know, the second coming of the Jesus phone is scheduled for this Friday, meaning that these folks will be sleeping on the streets for almost an entire week just so that they can get their hands on the 3G wonder.

And it’s not like they just started camping this morning either. There are reports that the lineup actually started last Friday, a full week before the launch of the Apple iPhone 3G. This is outside the store on 5th Avenue in New York, so I wouldn’t be that surprised if we start seeing lineups in other major cities over the next couple of days. You don’t want to miss out, do you?

I have a hard time waiting for a table at a restaurant. I can’t even begin to imagine what it’s like to wait for a week for a cell phone.