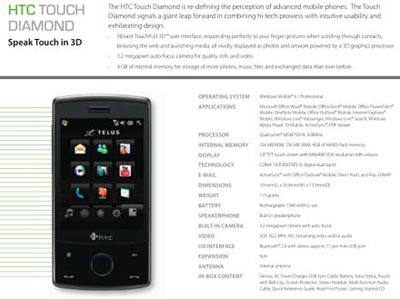 It was only yesterday that we learned about Telus getting the HTC Touch Diamond, but very little in terms of specs and features was revealed at that time. The details are still a little skinny, but we did find out one very interesting fact about the CDMA version of the HTC Touch Diamond going to Telus. It’s faster than the GSM version.

That’s based solely on the spec sheet, so we can’t say for sure whether Telus will “alter” the operating system in any way to suit their SPARK-filled needs. As you may have heard, the GSM version of the HTC Touch Diamond comes with 256MB ROM and 192MB RAM. The Telus version, while having the same 256MB ROM, actually got quoted with 256MB RAM too. Holding all else constant, this would mean that the Telus version could be marginally faster.

The rest of the specs seem to be in place, meaning you get GPS, Wi-Fi, and TouchFLO 3D, as well as EV-DO Rev.A in place of HSDPA. The slightly rounder Telus Touch Diamond is also five grams heavier and comes with a free case.