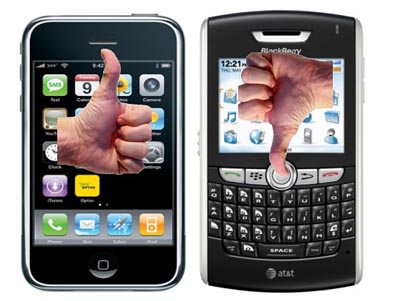 Over in Japan, they are surrounded by some of the most advanced technology this world has ever seen. They’ve got everything from robotic dogs to wheelchairs that can climb stairs. When it comes to the mobile phone market, they’ve got quite a few local toys as well, but what about the world of smartphones? Sitting on top is Cupertino and sitting at the bottom is Canada’s crowning jewel.

A recent survey was conducted in Japan regarding the popularity of different smartphones. The majority of respondents expressed interest in the Apple iPhone, despite the fact that the phone has yet to even launch there. All in all, 57.9% of those surveyed responded positively to the iPhone. Sitting at the bottom of the list (6th) was BlackBerry, getting just 8.8% of the vote.

I guess CrackBerry-ism isn’t quite as widespread in Japan as it is here. To check out the full report, head on over to this link. Bear in mind that the survey was conducted by iShare, the same firm that did a survey on how well the iPhone would fare in the Japanese market.