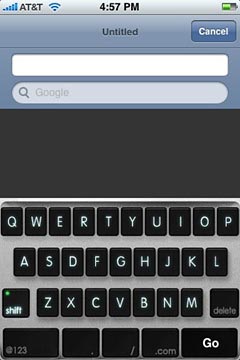 Not digging the standard keyboard layout on the Apple iPhone? What if you could swap out that palette for a more familiar set of QWERTY? It turns out that you’re not the only one with those kinds of inclinations, because someone has come along to make an on-screen keyboard template for the iPhone that mimics the appearance of the MacBook Pro.

Developed by katak, the MacBook Air Keyboard for iPhone is exactly what you’d expect it to be. You get a virtual silver background that is then occupied by a series of black keys. This probably won’t affect your typing speed all that much, but the contrast may make it easier for you to see the virtual keys on your on-screen keyboard. That and it looks crazy hot.

The keyboard “upgrade” can be found through the usual Installer avenues, provided that you have Planet-iPhones included as part of your Community Sources list. It should be there already.