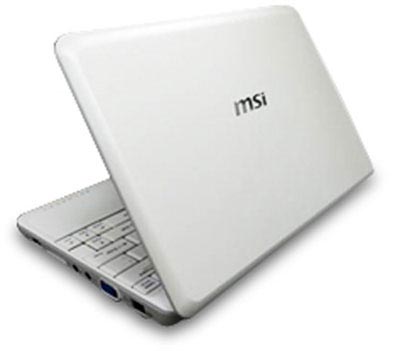 When laptops first hit the market, they were thought of as less powerful (albeit much more portable) versions of their desktop counterparts. These days, while the most powerful desktop is still a beefier machine than the most powerful laptop, the difference in performance to the average end user isn’t nearly as substantial. Speaking for myself, a simple Dell Inspiron notebook serves as my primary computer. You don’t need a desktop anymore, unless you really want to get into some hardcore gaming or multimedia editing.

The New Notebook is the Subnoteook

To fill the relatively new void of “less powerful but more portable” end of the computing market, Asus introduced the Eee PC to us last year. Before the Eee PC emerged, we were left with substantially less powerful Pocket PC devices and somewhat too expensive UMPCs. The Asus Eee PC established a relatively new niche, replacing the niche that was once occupied by your run-of-the-mill notebook (which may have since graduated to being your primary computer).

As I’m sure you’ve noticed, Asus is far from being alone in this end of the market anymore. The market is literally busting at the seams with new subnotebooks from just about every major manufacturer on the market. Apple isn’t there (yet), but you’ve got units from heavy hitters like HP and Dell.

Not all of these mini-laptops — also known as subnotebooks and netbooks — are built quite the same way. You could say that the subnotebook marketplace can be broken down into four reasonably distinct groups: Educational, Affordable, Fully Functional, and Powerful.

These are not the kinds of computers that you’ll find populating your local Starbucks coffee shop. Instead, this range of the “small notebook” market is filled with units that are destined for classrooms and for developing countries. They’re supposed to be as cheap as possible, while still offering a decent level of educational punch. Computers can go a long way in teaching a child. Even Hiro Nakamura thinks so.

The pioneer in this area is Nicholas Negrponte and the One Laptop Per Child (OLPC) project. The initial goal was to build the OLPC XO laptop so that it could sell for $100. When the first XO Laptop launched, it was priced at $200. Not quite there. Even so, Negroponte says that their ultimate goal is to get it down to fifty bucks. I don’t know how they’re going to do that if they want to have dual touchscreens.

Another notable entry at this level is the Intel Classmate.

This is probably the most popular segment of the subnotebook market. That’s because the “affordable and portable” is best exemplified by units that fall under this category. The original Asus Eee PC would fit in here with its 7-inch display and reasonably affordable price point. When they started to introduce the Surf line of Eee PCs, it got even cheaper.

As you can imagine, the functionality of these el cheapo notebooks is nowhere near the same experience that you’d get on an adequately equipped laptop or desktop. The Eee PC is not supposed to replace your main computer; it’s supposed to supplement it. The smaller keyboards, smaller storage capacities, and other quirks make it nearly impossible to use the tiny Eee as your primary computer.

It is here that you will find offerings like the HP Mini-Note 2133, Acer Aspire One, and MSI Wind. Typically, laptops here would be under $500.

Arguably, the aforementioned MSI Wind could fall into this category. The third step in the subnotebook progression adds more storage capacity, larger keyboards, and higher resolution displays. The pricing is also a lot closer to a “real” laptop.

It is here that you’ll find mini-laptops like the Asus Eee PC 901 and, perhaps more appropriately, the Eee PC 1000 and 1000H. This latter pair comes with a 92% full keyboard and a 10-inch display. This is almost infringing on the 11-inch laptops that already occupy a part of the Asus portfolio. The pricing is also in the $650+ range, making them not nearly as affordable as the preceding group.

With the pending arrival of the 904 and 905, pricing may take another nudge forward. Whatever the case, I still don’t feel that these laptops offer enough to supplant your main machine. Instead, they’re rather pricey supplemental machines, selling for between $600 and $1000.

Falling into the fourth and final category of subnotebooks are units that are arguably powerful enough to replace your main computer. They may be quite small in physical stature, easily fitting inside of a slingbag or a small backpack, but the specs and features found within read like they belong on a computer that is much larger.

For example, you could look into something like the Kohjinsha SX Series. Starting at about $1,200, the Kohjinsha is not only a small notebook, it also has the functionality of a Tablet PC, complete with a swiveling touchscreen display. Further still, this beast has a DVD burner, 1Seg TV, and it is powered by Windows Vista.

If you’re really prepared to break the bank, then you may want to consider something like the Flybook V5. It may have physical dimensions that mirror the Eee PC and other 7-inchers, but this thing has power to rival a 3GHz desktop. Like the Kohjinsha, it’s also a tablet that runs Windows Vista. The kicker is that pricing is close to the $3,000 mark.

Each step in the subnotebook progression is aimed at a slightly different segment of the market. They don’t necessarily cannabilize one another’s sales, because someone willing to spend several thousand dollars on a Flybook probably isn’t all that interested in a bargain-minded Eee PC Surf. The reverse, of course, is also true.

Whatever category you choose, this much is clear: the small notebook is no flash in the pan, no one-hit wonder. It’s here to stay.