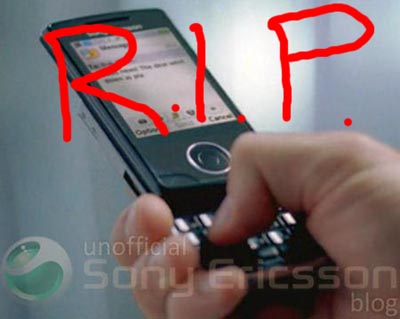 You know, I had high hopes for the Sony Eicsson Paris. By the look of things, the sliding smartphone had a lot of promise. You got a SureType keyboard for texting and email, but you also got the compact footprint of a slider. The design looked pretty sleek and it could have been a good consumer-level smartphone. Too bad it has now been killed.

The Sony Ericsson P5i Paris has officially been cancelled. After a good amount of debate at Sony Ericsson, it seems the company has decided to give Paris the axe. Shame. I thought the phone had promise. Along with the P5i Paris, Sony Ericsson has also decided to bid adieu to the G702, which you may know by its codename BeiBei.

We can’t confirm this last bit, but there are reports saying that part of the reason why Sony Ericsson decided to can the Paris was because of the “bad reception in the blogosphere.” I guess we carry more weight than we thought.