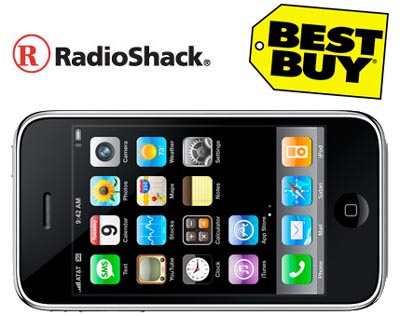 When the first Apple iPhone hit the market, you were able to buy it from both Apple Stores and AT&T stores. With the pending arrival of the iPhone 3G, two other stores may be added to that list. It’s still a totally unconfirmed rumor at this point, but word on the street is that Apple will allow sales of the iPhone 3G to take place at both Best Buy and Radio Shack stores.

You can already get in on some Apple action at both of these stores, so it wouldn’t take much to extend their distribution deals to include the iPhone 3G. To my knowledge, these retail outlets already sell AT&T cell phones as well, so they should be authorized to activate your shiny new toy too. Even if they can’t activate your iPhone 3G in store, you can do it at home yourself.

It is still unclear whether the iPhone 3G will hit Best Buy and Radio Shack stores on July 11th or if the extended retail presence is being planned for a few more weeks out. Stay tuned.