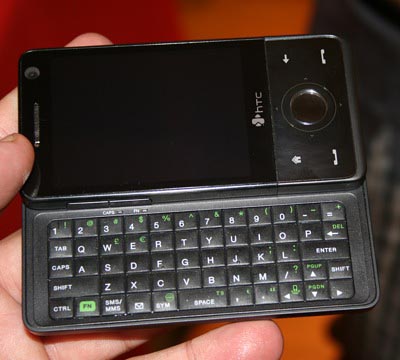 As sweet as the HTC Touch Diamond may be, the lack of a physical keyboard may be a deal-killer for people who send a lot of messages or write a lot of notes. The HTC Touch Pro addresses this very concern by throwing in a slide-out QWERTY keyboard. Yes, this makes the Pro a grade thicker than the Touch Diamond, but I think it’s worth it.

John Biggs from Crunchgear got some hands-on time with the HTC Touch Pro and he says that it is very “similar in size and shape to the Diamond.” As you can probably imagine, it’s pretty “classy looking” as well. The QWERTY keyboard looks to be much the same as other HTC phones on the market, though the left shift button looks bigger and the secondary functions are in green.

One of the reasons why I’m not buying an iPhone 3G is the lack of a physical QWERTY keyboard. Tell Steve Jobs to throw one of those in there and I might be sold.