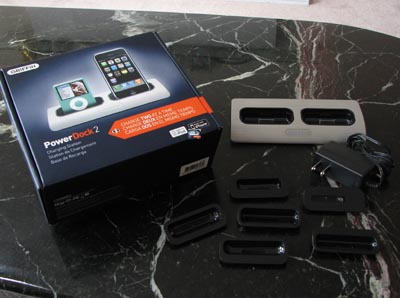 Maybe you’ve got siblings that share your passion for all things Cupertino. Maybe you have a spouse or children who are just in love with iPods and iPhones as you are. Whatever the case, having just one charging dock for your favorite portable music player may not be enough and it’s not like you all want to go hunting for an available USB port all the time either. Griffin Technology feels your pain and it is going to alleviate that headache with a brushed metal wonder.

The Griffin PowerDock is a handy charging dock for your iPod or iPhone. The latest version comes with slots for not just one, but two of your devices. This way, you can “put an end to family power struggles (literally) with PowerDock.” This way, you don’t have to fight over the AC adapter.

Not that Griffin Technology is going to be a fly-by-night operation either, because the Griffin PowerDock has been certified by Apple to be completely friendly for its devices. Right on the box, you can see that the PowerDock “Works with iPhone” and is “Made for iPod”. Those stamps can let you rest easy that Steve Jobs approves of this product. It’s not some knockoff with a sketchy power pattern.

Power, as you can probably guess, goes through the standard dock connector. In this way, the Griffin PowerDock is compatible with just about everything that uses the current dock. This includes the iPhone, iPod touch, iPod nano (all generations), iPod Classic, iPod 5G Video, iPod Photo, and iPod mini. If you’ve purchased an iPod in the last few years, it’ll probably work with this thing. The exception, of course, is the iPod shuffle.

Yes, I know that the Griffin PowerDock isn’t much more than just a good-looking charging dock, but it looks good doing it. The front plate features a brushed metal body that exudes a certain level of class and sophistication. Around the back and the sides is a simple matte finish, and then the bottom is outfitted with a grippy rubber base. It’s simple, but it works and it looks good.

The build quality is definitely there. The PowerDock is seriously solid and will be able to put up with a fair bit of abuse. The only thing is that the brushed metal finish comes with a series of rather deep grooves where dust and other debris may start to accumulate. That will certainly take away from its classy appearance. 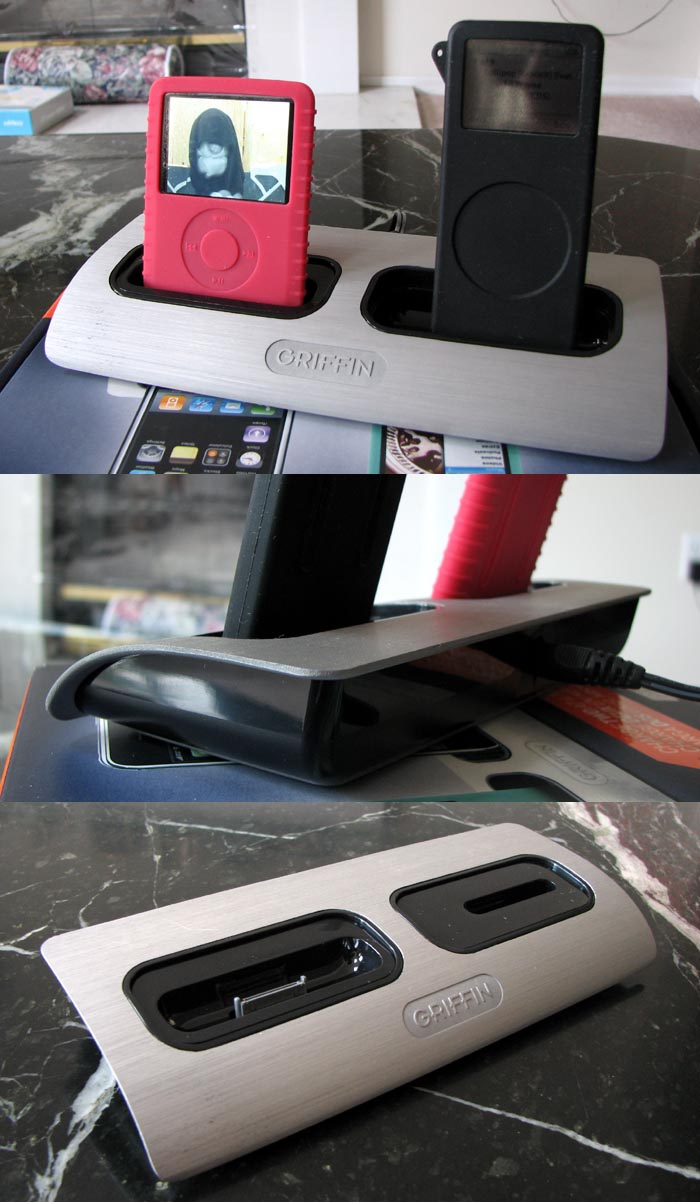 While they are not completely necessary, eight Universal Dock inserts are included with the Griffin PowerDock. On the inside lining of the box, it tells you which insert (they’re all numbered) corresponds to which model of iPod. This ensures a slightly better fit and it makes for a slightly sturdier hold.

Realistically, you can pretty much forget about these inserts. Just wiggle in your iPod or iPhone into an available power docking station and you’ll be good to go. The plastic inserts don’t completely support your iPod anyway. They act more like a guide so that you have an easier time inserting your iPod. That said, if there are only one or two different kinds of iPods kicking around in your house, I guess you might as well use the inserts.

Strangely, I didn’t find it immediately intuitive how to remove the inserts. I tried sliding my finger along the smooth plastic to no avail and it would be impossible to try to pry it out from the outside. Then I noticed a small fingernail-sized slit on the inside of the insert. Duh! A quick prick with my fingernail and the insert was out.

The PowerDock by Griffin Technology performs exactly as advertised and it does precisely what you think it would do. It is a bit of a shame that it doesn’t come with any additional functionality, because it would be nice to have a USB or A/V output of some kind. As it stands, the PowerDock doesn’t do much more than what a simple AC adapter can do, except it allows for a dock.

The Griffin PowerDock with two docking stations (reviewed here) is available now for $49.99. Another version with four docking stations is also available for $69.99. That’s a little expensive, I’d say, but it is also terribly convenient.