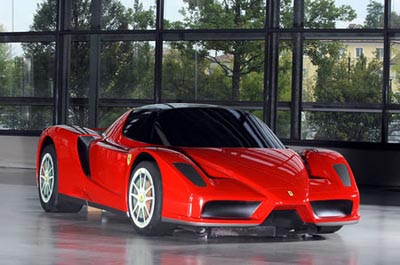 Production on the Ferrari Enzo ended a long while back and idiots like Eddie Griffin have already smashed a few of them beyond recognition. That’s okay, though. Ferrari is already working on the successor to the Enzo supercar and it seems like the Italian stallion is effectively being replaced by a much more nimble pony.

Word is that the successor to the Ferrari Enzo will be a fair bit smaller, lighter, and quicker. In fact, it could very well be the “quickest two-seater ever to roll out of Maranello.” By reducing the weight, the new Ferrari could be lighter on its feet (so to speak) and more maneuverable. The power-to-weight ratio will obviously be improved as well.

Ferrari hopes to improve fuel economy by 40%, reduce emissions by 25%, and not compromise performance anywhere along the line. As it stands, the yet unnamed vehicle will rock a 600hp V10 engine, weigh 2200 pounds, and get introduced in 2010. It will make use of an aluminum space frame similar to that of the F430 Scuderia. At 2200 pounds, this car is 660 pounds lighter than the Mazda MX-5 and only 216 pounds heavier than a Lotus Elise.

Production plans call for a total run of about 300 cars. And yes, it will be expensive.