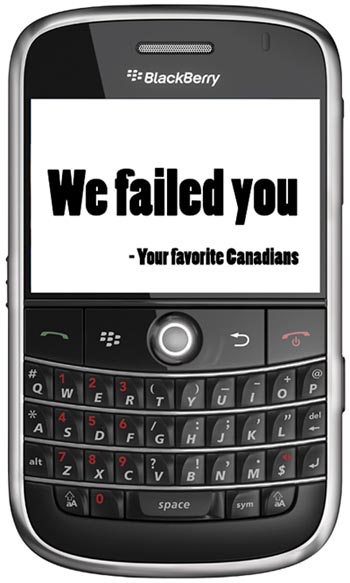 Assuming these launch parties are still in effect, Canadians should hopefully still be expecting the launch of the BlackBerry Bold some time soon. Unfortunately, the “soon” part of the picture for AT&T subscribers isn’t quite so rosy, because the Bold has reportedly been delayed until August.

The Boy Genius was told by two “high-level sources” that the Bold will not be arriving at AT&T until later on in the summer, because AT&T and Research in Motion “are still having software issues with battery life and overheating.” The device has not yet been certified by AT&T, so that doesn’t bode well for an earlier launch either. Until these issues are resolved, AT&T users will just have to sit tight and wait.

And we all know how much waiting sucks. Maybe you should just look at the latest Pearl or Curve instead… BUT IT’S JUST NOT THE SAME!