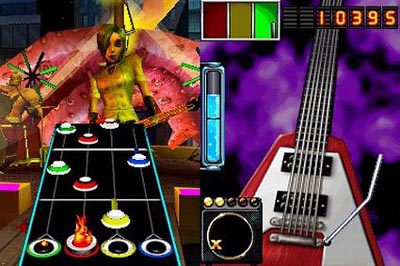 I’ve been enjoying rhythm games since the days of Drummania and Guitar Freaks from Konami/Bemani. When Guitar Hero hit the North American scene, I thought it was pretty cool to finally play to songs that I actually knew (I’m not terribly familiar with J-pop). Ripping it up on your Wii, Xbox, or PS3 is one thing, but what if you want to shred on the road?

Guitar Hero: On Tour was released this week for the Nintendo DS and we have finally been able to get the low down on the full track listing. While the home console versions got a lot more music (and downloadable content), we had to expect that the DS version would be a little lacking in this department. As such, it only has 25 tracks, plus one bonus song by Freezepop.

I have to admit that the Freezepop track is very suitable.

* Freezepop – “I Am Not Your Gameboy”