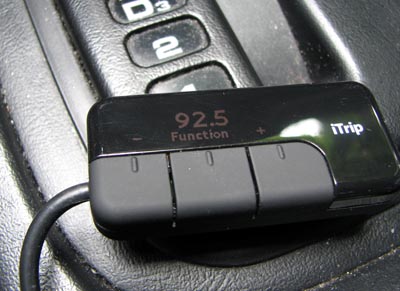 FM transmitters for the iPod seem to have been around for as long as the iPod has. Not very much has changed over the years in terms of technology, and the one name that seems to have enduring through the ages the best is iTrip. As you may already know, iTrip is the brand name for the line of iPod FM transmitters from our friends at Griffin Technology. Even though FM transmitters are relatively old technology, Griffin continues to push the envelope with new developments and new innovations.

One of the newest additions to the iTrip family is the Griffin iTrip Auto SmartScan. You may be able to find other FM transmitters for a lot less money, so is the iTrip Auto SmartScan really worth its $80 asking price? What makes it so special to warrant the premium in price? What makes it different than all the other FM transmitters out there? Read on to find out.

I know that was the first thought that crossed my mind when I cracked open the box to the Griffin iTrip Auto SmartScan. Digging a little deeper, however, you’ll quickly notice that this little music broadcaster comes with a few extra bells and whistles that you may not find with other competing devices.

For starters, the connection to the iPod is not through the standard 3.5mm audio jack. Instead, your portable music player gets linked to Griffin via the dock connector. This ensures that there is absolutely no loss in audio quality (at least initially). This also means that the volume level on the iPod doesn’t matter; it broadcasts exactly the same way.

Next, the iTrip Auto SmartScan isn’t just an FM transmitter. It is also a car charger for your iPod. Plugging into a standard 12V port in your automobile, this handy little gadget will make sure that the battery on your iPod stays topped up the whole time you’re driving to grandma’s house. Very handy.

Third, you’ll notice that there is a fuse built right into the cigarette plug. This is there to protect your Apple iPod (or iPhone) in case something bad happens. In this way, the fuse blows instead of the iTrip or your iPod.

Last, but certainly not least, is the SmartScan technology. I’ll go into further detail on this feature in just a moment.

You may notice that some FM transmitters for the iPod come with some sort of docking station. This way, the iPod remains nice and secure the whole time that you are driving. The docking station can be mounted on a vent, for example. This is not the strategy that Griffin took with the iTrip Auto SmartScan.

Instead, what you get is an extra long cable with a cigarette plug on one end, an iPod dock connector on the other hand, and an in-line controller somewhere in between. This cable is quite long (about five or six feet), so you can effectively place your iPod anywhere you please. If you’re not a fan of long cables, you may want to consider a different transmitter.

The user interface has been stripped down to just three rubbery buttons. The functionality of each button changes depending on the situation and this is indicated through the Sony-like OLED display hidden behind the glossy black casing. Visibility with such a controller is very poor under bright sunlight and I wish that Griffin used a more conventional (or brighter) display for this reason. Otherwise, the menu system isn’t astounding, but it is intuitive enough. 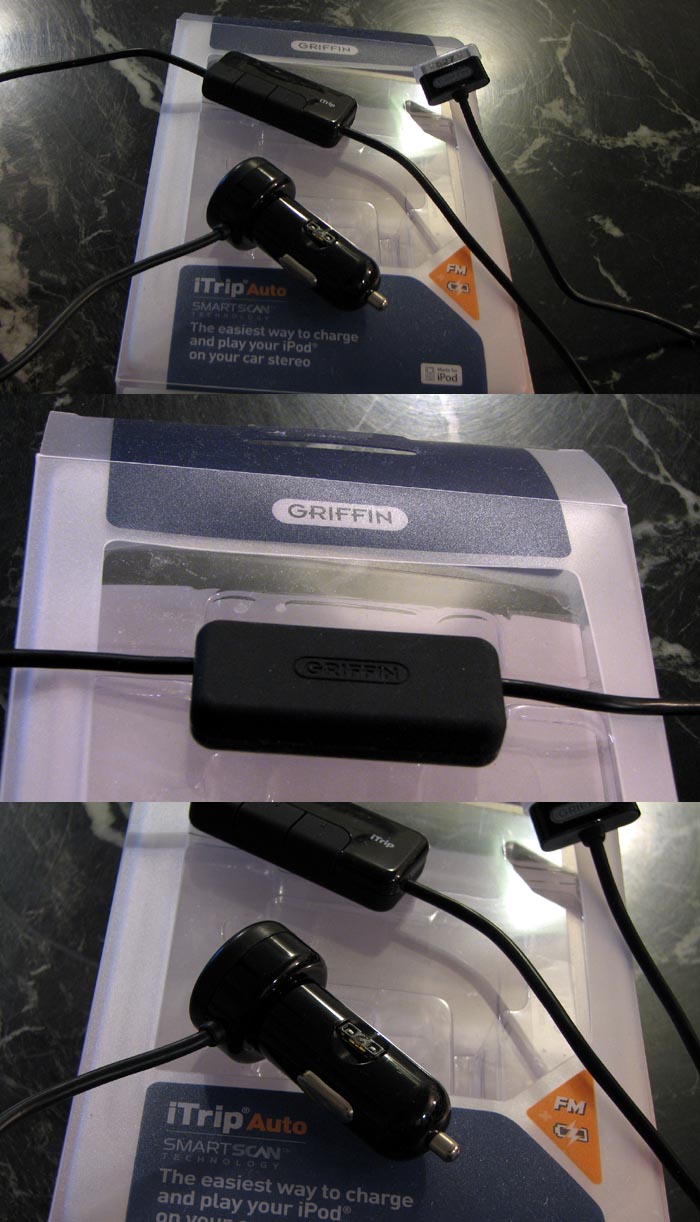 Aside from a different display, the other major difference between the iTrip Auto SmartScan and last year’s iTrip Auto is — you guessed it — the inclusion of SmartScan technology.

You don’t have to fumble through and find the best frequency for this transmitter, because it will do this for you. Activate the SmartScan function, wait a few seconds, and the device will recommend three of the best frequencies to use. This is a good idea in theory, but it was hit and miss in practice. I’d say that the success rate was barely 50%. Sometimes you’ll get a good hits; other times you’ll get three completely unusable FM frequencies.

Bells and whistles are all well and good, but if you can’t bring it when it comes to reception and audio quality, you might as well call it quits as an FM transmitter. I didn’t expect the world when it came to audio quality, because this is just an FM transmitter after all. Even so, the quality of the music being broadcast was a notch or two below a real FM radio station. It gets the sound across, but you’ll be listening to the equivalent of a cassette tape. At best.

Reception was a strange phenomenon for me. I could get the iTrip Auto SmartScan to work in a 2001 BMW 325i and a 2000 Acura Integra (the latter had an aftermarket Pioneer deck), but I got nothing but static on a 2007 Honda Fit. If you choose to buy this product, make sure they’ve got a good return policy.

I can’t say that Griffin did a bad job with the iTrip Auto SmartScan. Adding the car charger functionality to the FM transmitter is a great idea and I don’t mind the lack of a larger docking station. The user interface is reasonably intuitive, but they could do a lot better when it comes to visibility on the display.

Audio quality is really mediocre and given the $80 asking price, you are much better off investing in some sort of iPod integration kit for your car. Sticking to the FM transmitter arena, you will always be disappointed with how your music sounds. And that’s how I ultimately felt about the iTrip Auto SmartScan. It’s just too expensive for what it is: old tech in a glossy new package.