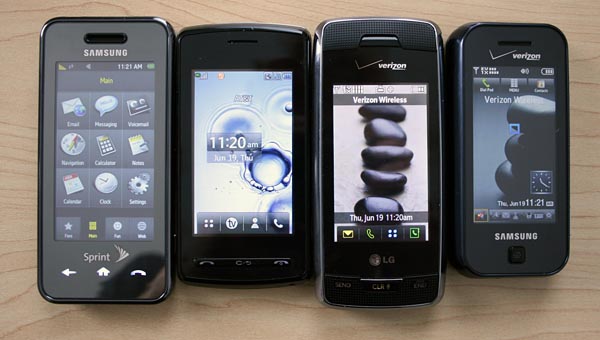 What do you do if you’re a little anti-Apple or you want to avoid the potentially expensive contract that will accompany the iPhone 3G? You look at all the other touchscreen phones that are available, of course! With so many handsets on the market featuring large touchscreen displays these days, it can be hard to decide which is the one for you.

Yes, it may be a little unfair to compare these four mobile phones with the Cupertino second coming, but it’s a comparison that has to be done. Thankfully, someone has already done it for you. Matt Buchanan of Gizmodo recently took a look at the iPhone 3G and pit it against the Samsung Instinct, LG Vu, LG Voyager, and Samsung Glyde.

In the end, while the LG Vu seems to have the best touchscreen and touch keyboard, Matt decides that the Samsung Instinct is the most iPhone-esque of the iPhone competitors. He breaks it down with a full chart looking at physical keyboards, email, visual voicemail, music, Wi-Fi, and other stuff that may make or break your purchasing decision. His article is well worth a read, especially for people in the market for a new iPhone clone.