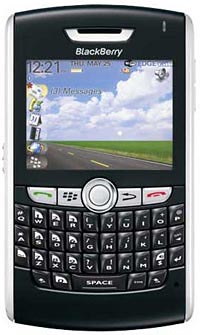 If you happen to find yourself in a Rogers Wireless store, you may notice that they are completely sold out of the BlackBerry 8800. The QWERTY-packing device with the funky trackball navigator has been reasonably popular for the Canadian provider, so why haven’t they bothered to replenish its stock? Well, as great as the 8800 may be, the 8820 is just that much better.

Rogers Wireless is officially retiring the BlackBerry 8800 in favor of its successor, the BlackBerry 8820. The form factor is exactly the same as the outgoing unit, getting the same color display and keyboard, but there are a few notable differences on the feature sheet. The BlackBerry 8820 gets Wi-Fi and GPS, the former of which lets you do that Home Calling thing with Rogers. There’s still no camera and no HSDPA.