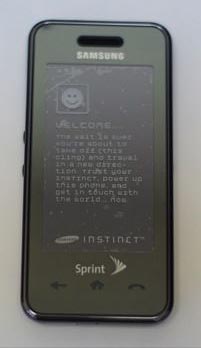 Before the iPhone 3G was announced earlier this week, it sounded like the Samsung Instinct from Sprint would be quite the bargain at just $199. And then Steve Jobs stole their thunder. To counter the pricing on the upcoming Apple iPhone 3G, it has been announced that the Instinct will be even cheaper. And it’s coming this Friday.

Set for launch on June 20, the Samsung Instinct will be available for the super low price of $129.99. In order to take advantage of this asking price, you’ll need to deal with a $100 mail-in-rebate and a new two-year contract, but that sure beats kicking around town with an ancient RAZR or something.

Plans start at $69.99 a month and that includes 450 voice minutes. Look for the Instinct through Sprint stores, online, and at Best Buy.