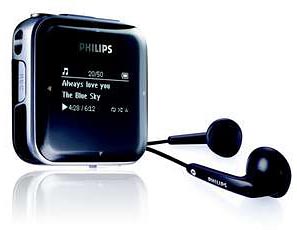 It might be useful for Philips to come up with some better names for these tiny MP3 players, but the one critical advantage that they’ll have over the iPod shuffle is the inclusion of a rudimentary display. You won’t be able to watch any videos on that little thing, but the monochromatic display is perfect for telling you the name of the song, the battery level, and other useful details.

Ranging in storage from 2GB to 4GB, the Philips MP3 players are called the SA2845, SA2825, SA2840, and SA2820. My guess is that the model numbers that include a “4” are the ones that have 4 gigs. It’s also notable that certain units (maybe those that end in a 5?) will have integrated FM radios as well, another advantage over the iPod shuffle.

The footprint on the Philips MP3 player is much the same as the shuffle, but it’s obviously not nearly as thin. Prices start at around $45.