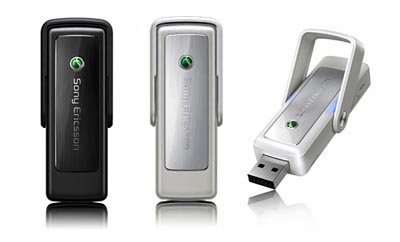 Talk about some crazy convergence. Why would you bother with three separate devices hogging up three separate USB ports on your computer when this latest Sony Ericsson offering handles all three of the features mentioned in the title of this post?

The primary functionality on the Sony Ericsson MD400 and MD400g is that they act as USB modems. About the same size as most USB flash drives, these little modems will let you enjoy 7.2Mbps HSDPA and 2.0Mbps HSUPA. To make it even more compact, the USB connector is retractable and the antenna is foldable.

As if providing you with high-speed mobile access wasn’t enough, the Sony Ericsson MD400 and MD400g also act as card readers for both MemoryStick Micro (M2) and microSD cards. If you’re wondering what’s the difference between the two units, the MD400g adds GPS to the fray as well. Look for both to ship later this year.